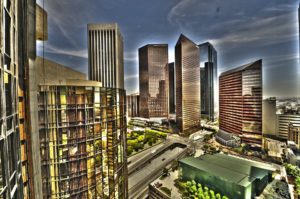 There have been some interesting developments/transactions in the DTLA neighborhood recently.  In the real estate industry, Arup is on the move.  Currently based in Playa Vista, the plan is to move to DTLA’s very own Wilshire Grand Center. Arup will take over 66,000 square feet on a 15 year lease which is one of Southern California’s largest 2018 leases.  It is indicative of a general trend of firms moving into the DTLA area which is great for business.

One reason DTLA rentals are becoming more popular is the simple fact of price:  compared to the going rate in Santa Barbara is approximately $5.78  per square foot per month and in LA, $3.55 per month.

All this is great news.  But some say worry that there is still work to be done vis-à-vis enhancement of DTLA’s retail district.  But even that is changing thanks to The Bloc’s “Merchandising Plan” which includes a lease signed by Uniqlo in one of the “most coveted retail spaces,” there in a 15,000 square feet two-story space.  This will be “considered one of the store’s major flagship locations in LA.”