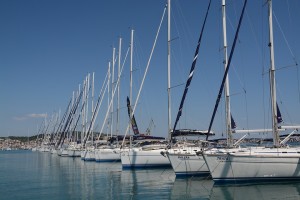 San Pedro is the host of LA’s first Fleet Week.  With military ships docking at its port over Labor Day weekend, the public were able to go on a tour of the naval vessels (including the Iowa battleship, Wayne E. Meyer missile destroyer and ship America), checking out some of the 1,500 sailors and military personnel.  There were search-and-rescue demos from the Coast Guard, military aircraft aerial demos and more.

While Fleet Weeks have been popular for many decades in other cities (like New York, San Diego and San Francisco), this is a first for LA, being termed a “new end-of-summer tradition” for one of America’s busiest container ports.  While the Port of LA has hosted Navy Days L.A. for the last ten years which is similar to Fleet Week showcasing Navy and Marine Corps activities, it is not on the same scale as Fleet Week.  Due to efforts from military and civilian agencies which requested an amplification of the festivities, Navy Days was changed to Fleet Week.

Events during the week are free and open to the public, to celebrate sea services that dates back to World War II and has been hailed as a Naval-American tradition.