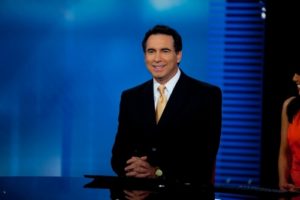 On October 1, 2017 a 64 year old man opened fire on a Nevada concert.  Stephen Paddock killed 58 people (including himself) and injured a further 851.  Today his motives still remain unknown. At the time of the tragedy, together with colleague Pat Harvey, Rick Garcia documented the Las Vegas mass shooting in depth. Rick Garcia began the report by saying: “It was 10 minutes of terror on the Vegas strip [at which people were] stunned and sickened by the violence.”  With 22,000 people at the concert who will all, as Harvey noted “be haunted for life, with memories of the horrific violence.” A year later, Pat Harvey returned to the scene for a live reporting of the Strip that went dark “in remembrance of the 58 people killed in [the] mass shooting there one year ago.” Although Rick Garcia didn’t return a year later, Harvey wasn’t alone in her memorial visit.  Chuck Henry reported for NBC4 News at 9pm on September 30, 2018 about the upbeat hashtag created for the tragedy:  #VegasStronger is what is the city’s new phrase a year later. The hashtags will be seen on every part of the LA strip to commemorate the event. The event was ranked America’s “deadliest mass shooting committed by an individual.”