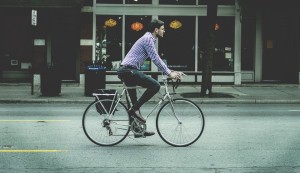 What are the best, cheapest and most efficient ways to get around Los Angeles? Let’s first look at the car-sharing programs. First, there is WaiveCar that was recently launched in Santa Monica. “We waive the fee; you drive for free.” So how does that work if it’s free? How is WaiveCar making a profit? Well, while customers can use free cars for two hours, for every subsequent hour, there is a $5.99 charge. Co-founder of the firm, Isaac Deutsch explained that funding is coming from “the digital displays atop its fleet of four-door electric Chevy Sparks” (similar idea to that the VeriFone displays found in New York and Las Vegas taxicabs) he added.

Another ride-sharing company is Lyft. This provides automakers with “direct access to the growing market for ride-sharing and a potential channel for offering self-driving cars for on-demand use” and has received a $500 million investment from General Motors. As part of the investment deal, GM is getting a seat on the Board of Directors at the firm. Lyft drivers will be able to rent vehicles from General Motors which could “expand Lyft’s business by giving people who don’t own cars a way to earn money by becoming Lyft drivers even though they don’t own a car.” According to company co-founder and President, John Zimmer, “working with GM, Lyft will continue to unlock new transportation experiences that bring positive change to our daily lives. Together we will build a better future by redefining traditional car ownership.” The Lyft app matches you with local drivers at the tap of a button. Just request and go.

There is always the traditional option of car rentals. According to a report in Frommer’s, “Los Angeles is one of the cheapest places in America to rent a car. The major national car-rental companies usually rent economy- and compact-class cars for about $40 per day (hybrids $80-$90) and $200-plus per week, with unlimited mileage.” Or the old school trains and buses, operated by the Los Angeles County Metropolitan Transit Authority.

For those who just can’t bear the thought of incessant traffic (which is as akin to LA as the apple is to New York, according to Sara Lieberman who wrote of this in the Conde Nast Traveler), get a bike. In Santa Monica this is an extremely popular way of getting around and for those who don’t own a bike Helen’s Cycles rents them out for approximately $40 a day. And you’re killing two birds with one stone: getting around while keeping in shape!