It was a recent article in The New York Times by Tim Arango, Adam Nagourney and Natalie Kitroeff that sung the praises of California’s economic surge.  They began their article by describing California as having:

“the highest concentration of billionaires in the country. It exports more computers than any other state. It is the nation’s largest producer of agriculture products by far: More than $6 billion in dairy products alone last year.”

They referred to California as “an economic powerhouse — now the fifth largest economy in the world after surpassing the United Kingdom in total output this year.”

But their concern is of Jerry Brown’s uncontested successor – Gavin Newsom – and how he will “navigate California through challenging fiscal times could be critical to assuring both the state’s continuing economic durability and its outsize contribution to national prosperity.”

Founding Partner of Beacon Economics, Christopher Thornberg believes that California is reflective of the economy as a whole.  He said:

“So goes California, so goes the U.S.. It is far and away a dominant source of job growth in the U.S.”

And that’s good because a recent LA Times article noted how employment rates in California are positive too, with an additional 44,80 net jobs and a low of 4.2% in unemployment.  There was an increase in wages but that was  not “enough to top the increase in consumer prices.” 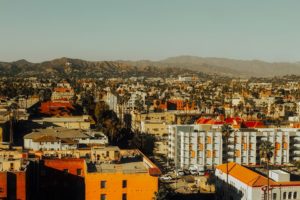