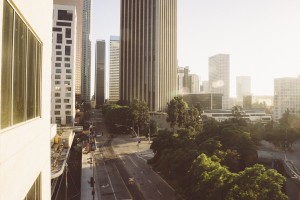 The Honda of Downtown Los Angeles dealership on the Figueroa Corridor is expanding.  With this it will be moving from its long-held location at 1540 S. Figueroa St., by the 10 Freeway overpass, to the intersection of Martin Luther King Jr. Boulevard and Hoover Street near Exposition Park, where the new dealership will be built. The Department of City Planning has documents attesting to Honda’s plans to demolish an existing two-story building and raise a pair of five-story structures, one on each side of Hoover Street, to house showrooms, service facilities and vehicle storage areas. The new dealership, slated for completion in 2021, would effectively be the new headquarters of Honda of Downtown, though the property on Figueroa Street would still operate as a dealership for used cars and performance vehicles, according to a report from the real-estate website Urbanize.la.

There’s not such good news for anther transport-related expansion in Los Angeles. BNSF Railway Co.’s new terminal near the Port of Los Angeles – that has been in the works now for close to 10 years with a $50m price tag – is facing challenges from a local judge who ruled that the terminal’s environmental review was not adequately undertaken. This could actually bring the project – that would offer city residents much-needed rail capacity – to an end. Right now BNSF is considering its options: to appeal, negotiate, or abandon efforts entirely.

Meanwhile, it seems LA is a great place for a start-up to expand.  According to Daniel Wirjoprawiro, it is “the fastest growing tech market in the United States.” In an article in StartUpSmart (based in Australia) he gives 6 reasons to explain this, having himself already made the “move to the City of Angels.”  These are:

Perhaps the judge who gave the negative ruling on BNSF Railway Co. should read Wirjoprawiro’s article and reconsider his position.