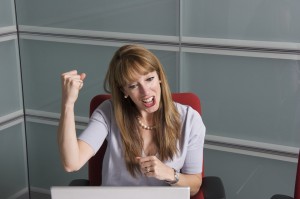 Do people in LA love or hate their jobs?  According to a recent report, it’s a bit of a mixture and not so easy to figure out.  Likewise Twitter came to the same non-conclusion.  There are a lot of posts but none of them are conclusive.  Apparently the positive comments are coming in thick and fast (.70 tweets per 100,000 residents) and the negative ones are also quite prominent, but not as loud (.34 per 100,000 residents).

Nationwide it seems that the people who hate their job the most are those in retail. And the time people most hate their jobs are mid-July.  This could be the case though because there are simply more people working – students, seasonal staff members, summer jobs, etc.

Anyway employers in the LA region – and elsewhere throughout America – is that when it comes to tweeting at least, people are more likely to post good things about their work, rather than bad, with approximately 1,000 more tweets expressing job love at any given time.

Still, at least those in LA can’t really complain about the lack of available jobs.  It seems that LA county is actually a leader when it comes to recent job growth and business creation, and the New Map of Economic Growth and Recovery report placed this region at the top of the list for counties with the largest number of jobs added between 2010 and 2014.  Indeed, during those four years, there was a 9.9 percent growth rate, which translated into an additional 352,840 positions. The region also topped the list of the 20 counties that added the most new businesses from 2010 to 2014.