This video centers around the discussion of Reyner Banham’s 1971 book: Los Angeles: The Architecture of Four Ecologies and how relevant it is for today. With 5 panelists (Shumi Bose, Joe Day, Jia Yi Gu, Victor Jones and Rosario Talevi), the questions on how these theories held up over the last five decades and what gaps are still in place are discussed.

In this video we see some of the developments taking place in Downtown Los Angeles (the area that spans Alameda Street, Little Tokyo, First Street, LA River, Violet Street).

Currently: “Network pioneers are attempting to make balance in the midst of the monetary issues achieved by improvement and the need to safeguard the character of the Arts District as an innovative network that has made commitments to the social and financial prosperity of the city for a considerable length of time.” 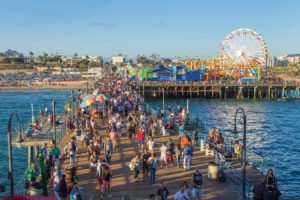 Knoll recently opening a Home Design Shop in LA.  It is hoped that this endeavor – that coincided with Knoll being in business for eight decades – will bring networking opportunities for local designers and Knoll’s accessories, furniture and textiles.

The store – at 314 North Robertson Boulevard – was designed by Benjamin Pardo (a design director at Knoll), Johnson Marklee, Barbara Reimelt and the NinetyNine Group.  The first direct-to-consumer retail operation of the store was opened in NYC and, given how successful that was, the idea emerged to create one in LA.  According to Pardo:

“Los Angeles interior designers set the benchmark for modern with a special passion for stunning materials and finishes. Our LA Shop experience is designed to deliver their bold vision by offering unsurpassed customization of furniture forms that complement architectural space.”

For those passionate about their city but don’t want to leave their homes, there is now an online store for purchasing Santa Monica themed memorabilia.  As CEO and President of Santa Monica Travel & Tourism (SMTT) Misti Kerns said:

“We are delighted to have launched Shop Santa Monica in celebration of our charming oceanfront city.  Inspired by a destination that is truly like no other, our collection allows people from around the world to enjoy a piece of Santa Monica.” 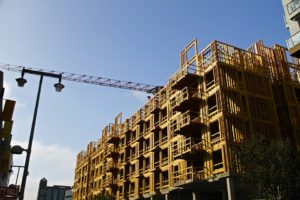 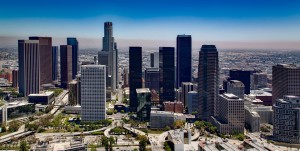 Frank Gehry recently designed a project comprising a 234 foot tall tower for the eastern edge of the Sunset Strip.  This was just unanimously accepted by the LA City Council, which means following its completion, the area will be privy to two residential towers, a shopping center and terraced gardens.

In 2019 a Park Hyatt hotel will open in downtown LA as part of the Oceanwide Plaza project.  Comprising 184 rooms, it will be located right by L.A. Live and the Staples Center.  Developed by Oceanwide Holdings, the plan for the area is also over 500 luxury residences and a 166,000 sq. ft.  open-air retail and entertainment galleria.

The good news with all of this construction is that the environment will not necessarily be negatively impacted.  In fact, over the last 10 years or so, the region has developed a reputation for becoming a “hub of green building activity.”  One example of this was back in 2002 when LA became the first US city to request LEED certification for practically all of its new municipal buildings.  Seven years later this requirement escalated from a mere certification to LEED Silver which renders an even greater commitment to establish sustainability from each new municipal building that appears in the skyline.

These green efforts are continuing as by 2020 all new residential construction statewide is being ordered by the California Energy Commission to be zero net energy by 2020 and by 2030, new commercial construction to follow suit. 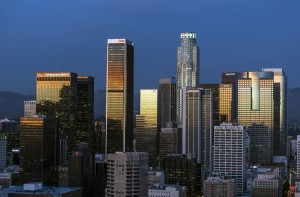 For example, it is true that the Dutch Chocolate Shop in Downtown LA is quite the historic core of the region.  With its wealth of “historic Batchelder tiles (crafted by artist Ernest Batchelder of Pasadena) it is “considered by many experts to be the tile-maker’s most important commission.” Owned by a trust, this 6th Street property is now up for sale.  And although the tiles were hidden away until 2012 (when they were quit by chance discovered during a public tour), any passersby touring the space can be privy to a “wonderland of elaborate tile murals.”  J. Austin Russell real estate agent has the listing.

Meanwhile, 58 feet of the Wilshire Grand was raised to the top, giving it “the distinction of being the tallest building the western United States,” as it rose 1,100 feet. Indeed, in 2014 it was listed as the tallest structure that had been erected “in an active earthquake zone.” Those in LA know it for changing their hometown’s skyline.  Architects finally got the approval from city officials to develop this, which is quite different from the high-rise design typical for the area. The transformations made at the Wilshire Grand has been praised by architects who hope that “one day the airspace above the ubiquitous sprawl will incorporate the more daring and aesthetic shapes that have emerged in cities around the world.”

And then there is Metropolis, quite an “unprecedented monstrous patchwork of glass and concrete next to the 110 Freeway.”  Winston Yan, an executive and architect at Greenland (a Chinese real estate firm), over the last 10 years he has been privy to the huge urbanization China has encountered.  So of the Metropolis he says “It reminds me of what’s happening in Beijing and Shanghai. Now it’s happening here.”

These are just some of the impressive architectural news items that have appeared recently in connection with downtown LA.